What to do in and around Bogota, Colombia?

Finally, finally, finally. Another reunion after 2,5 years, but now only in Bogota, Colombia! It was the time that Daniel and I would meet again. Before I already went to Chile, I bought my ticket to Bogota (where he lives) for six days. I will tel you everything about what to do in and around Bogota?

Where should I start?

So, yes.. where to start? I think with the flight, because that was something. Back in the time while buying the ticket for Bogota. It was all a bit stressful, because I wanted to find the cheapest but most efficient flights, to make sure that I was in Bogota as long as possible. I searched on (literally) the whole internet.

The reason by the way, why I could (what I thought only) go six days was because of National Holiday in Chile. Although, I should not forget to mention that my supervisor one week before told me that he thought that I was going for 10 days to Bogota…… I was a little bit sad in the beginning, but yeah, a miscommunication and you all know that changing a ticket also has a price, so I let it this way and those things happen.

Okay, back to the flight. So, I bought my ticket while being at the beach house on a sunny Friday afternoon. The ticket was still expensive but the times where good, although LATAM (airplane company) changed the departure time twice. Eventually I left 1:05 Friday morning and as of my own surprise, a week before my departure my eye fell on the word “Business Class”. I checked everything and yes, I booked Business Class for my way to Bogota. Do not ask me how, because I still have no idea haha. By then, I understood why my ticket was so expensive (I leave out the price in this story), but yeah, I thought now I have Business Class I can better enjoy it to the fullest because this is probably not going to happen many more times (if I don’t make the same “mistake” again haha…). 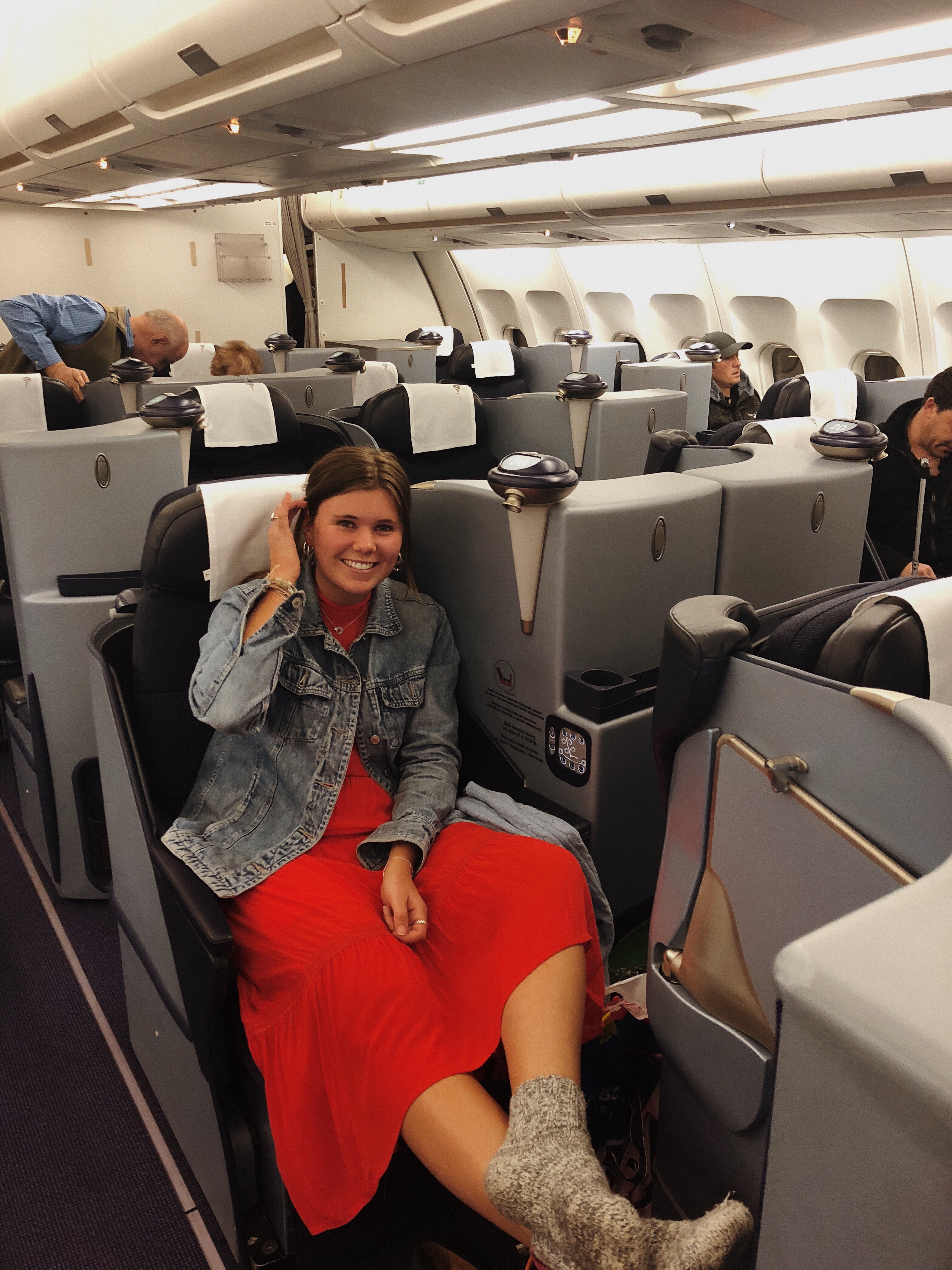 The reunion with Daniel

I arrived in Bogota at 5:20 in the morning (the time difference is two hours with Santiago). The flight was all good, but still didn’t sleep a lot. However, because I was full of adrenaline I didn’t feel it. Dani picked me up from the Airport and we went to his house which was like 20 minutes away.

Although Dani and I, most of the time, have weekly contact, share a lot and FaceTime sometimes, it was still a nervous moment to see someone again after 2,5 years. No worries at all, because the bound was still as strong as it has always been.

After a sleepy morning/afternoon and meeting Dani’s family, Dani and I went up to Monserrate to have an amazing view of Bogota and visited the old house of Quinta.

On Friday night we left Bogota and with “we” I mean; Dani, Angelica (Dani’s sister), Nicolas (Angelica’s boyfriend), and me. Boys in the front, girls in the back, Latin music and goooo. We rent an Airbnb in Villa de Leyva for the weekend. Villa de Leyva is a historical village with actually only white houses and during the night you usual see lots of stars (unfortunately we had lots of clouds).

Haha yes, you read that well; horse riding. Never liked horses and obviously I had never ride a horse. I must say, I was afraid. The first five minutes on the horse were not one of my favorite moments in life, however, that changed very very fast. I never expected it, but my gosh, I loved it so much! The horse wasn’t always listening that well, because when I wanted to go faster he didn’t. Later on, Dani told me that the horse had a total different name than I called him, so maybe that is the reason haha..

In total the horse riding was one hour, although I would have loved to ride longer. By the way, Villa de Leyva is full of horses and people who offer those tours. It is more usual to have a horse than a car, let’s put it this way. So, when you want to ride a horse, you just search for a cowboy (we all know how a cowboy look like right?) and that’s it!

On the way back Dani’s horse fell and therefore Dani also fell of the horse. I was just a little bit behind him galloping too, and it didn’t look really good. He rolled like around three times over the ground, but gladly he was “fine”. I was very worried about his head because he fell quiet hard. Gladly, his head was fine, but he still had a wound on his elbow and knee + jean broken.

The horse was also wounded, but the people took great care of him and Dani, too. Because after the tour, we went to their office and they helped cleaning the wound. Although, a few days later Dani still had pain, we all in general (again) enjoyed the horse riding very much!

We went for squad riding after the horse riding, which you can see when you look at Dani’s jean… I still don’t know which one of the two I loved the most, but I definitely enjoyed this one too!

So, yeah the experience. What should I say? I just loved to be a bit extreme and drift all around in the mud. All did Dani told me, he was a bit in a shock in the beginning because he didn’t expect that I would be the second Torreto (Fast&Furious actor). This is also a side of me, it is just that I do not get to show it very often, but it doesn’t say it is not there you know.

And yes, lots of mud and speed, so dirty legs, trousers and shoes. I can tell, the shower after was great!

The Airbnb provided a guitar which we first didn’t know. Dani plays guitar and sings. So, while he practiced some songs, I just had another moment to be grateful to be alive and have such amazing, inspiring people around me.

Besides all the cute white houses, the traditional shops and nice restaurants, there is another thing which really catched my eye. During the evening, lots of people gather together at the Plaza and take their drinks to chat and dance with their friends or meeting new people. Something which I had never seen before. Those people, their culture, and this was just day two!

The next morning we took it all a bit slowly. Breakfast was actually served until ten, but I think we came around eleven or even later. Very kind though, that they still served it for us. I bought Pisco (typical Chilean and Peruvian alcohol- 40%) for Dani as thank for everything and the guys bought Aquadiente (typical Colombian alcohol- 29%). We drunk at the Airbnb that night, played games and danced, but it went all a bit too fast and was too strong. Gladly, a hangover wasn’t included.

After the breakfast we headed to Raquira which was around an hour in the car, but in the direction of Bogota. It felt like we were doing a formule 1 race, because beside the roads where waiters waving with red flags in sense of; “Come and have lunch here”. Furthermore, Raquira is a small town with colorful buildings and traditional shops.

After Dani had parked the car, we walked a bit around. Although, I almost love everything they sell like the bags and hammocks, the clothes, the souvenirs, I didn’t buy anything, just because I can buy everything then haha…

The weather was good that day, also in Raquira it was quiet warm. Therefore, I was finally able to wear my favorite dress. So yeah, as you can expect we made some pictures, also together. We laughed a lot and again, I felt so grateful to have such an amazing time with those people.

Before we had lunch at an Italian restaurant, we passed the place of the Independence of Colombia. The little white bridge you can see on the picture, is where it all finished. Dani and Angelica told me it was a small bridge, however, I didn’t expect it would be that small haha.

Wandering around in Bogota

On Monday, we went into the city centre by bus. Dani wanted to show me the Plaza (which is nice but looks like every square in the world) and Chorro, which is an area with lots of graffiti. However, that is not the biggest reason for the specialty of Chorro, because Chorro is where Bogota began.

So, Chorro is the beginning of Bogota, although Bogota was first called; Bacatá. There were only twelve houses and one church (which you see on the picture below). The houses are all very low and small by the way.

After we walked a bit around, Dani said that I should try another typical drink, Canelazo with alcohol. We went to the oldest bar, called Santa Marta Café, and ordered. Canelazo is something sweet and looks like sugar, and is together with spices. The drink is hot and you drink it like coffee together with an alcohol of your choice. I had tequila with passion fruit and Dani had vodka. It was much stronger than I expected and wasn’t able to finish. I was already tipsy after 5 sips haha…

On Tuesday, we took the car again and left Bogota after lunch to Laguna de Guatavita. Even though, it was raining cats and dogs, it was a very nice trek of around 45 minutes through the woods with as result the Laguna. The tour was in Spanish, therefore, Dani was still the whole time whispering the translation in my ear, still I am not able to tell you the whole story again (I forgot, sorry Dani…). I know people, not the first time I write something which I actually doesn’t know about, but yeah that’s me. At that moment, I loved it and understood the whole story. However, because I receive so much information, I cannot save everything in my little cutie brain you know.

And now!! Here it comes, one of my favorites; Catedral de Sal. I think it is good to know that I don’t believe in God or anything, but that I am very open to learn more about it and see other people’s perspective.

The reason why the Catedral de Sal is one of my favorites is, because it is 180 meters under the ground and takes one kilometer before you are there, and because it was just insane beautiful and magical. Everything is made from salt (that’s why “Sal”) and took in total 70 years. All the work is done by miners, who still work in there today to make it bigger with more levels.

It is difficult to show and explain how touchy this place is. So yes, if you are ever close to Bogota you MUST go there, you MUST!

Oh and we even helped the miners a bit with their work. I know, it looks very pussy, but it was hard and heavy people. Yes, lots of respect for the miners!!

To finish, as you have seen and read, I did really have six fantastic, amazing, lovely days. They couldn’t have been any better and yes it was difficult to say good bye, but great things are waiting for me in Chile! I am just a very grateful woman and cannot thank Dani and his family enough.